Benefits of the Lickimat!

Benefits of the Lickimat!

Benefits of the Lickimat


Within the last few years, we have seen a rise in the sale and purchase of the Lickimat. But why have they risen so quickly in popularity? Despite their simple appearance, Lickmats have many beneficial qualities that seek to improve your dog's health.


So what are the benefits of a Lickimat?

There are many benefits of a Lickimat, most notably its unique ability to reduce anxiety and boredom in pets. Other benefits include the promotion of fresh breath, and the slowing down of eating (this helps to reduce bloating symptoms). It also stimulates saliva, which helps to promote digestion. The licking action also redirects those behaviours that could be negative, like the excess licking of the paws which can lead to further health issues.

How does the Lickimat reduce anxiety?

Now you might be thinking how does a product like this reduce anxiety? Well, it is actually quite simple, the repetitive licking action releases endorphins, which help to reduce the symptoms of anxiety. Now, what are endorphins? Endorphins are chemicals that are released as the brain responds to different stimuli, most notably pain and pleasure. The licking action is pleasurable to dogs so endorphins will be released.Endorphins are the body's natural pain killers, they are able to generate a feeling of general well being. Think about it like a runner's high, after we exercise we often get a euphoric feeling, this is the endorphins being released. These positive feelings alleviate the feelings of anxiety in your dog.


Did you know endorphins also help to reduce inflammation?

Endorphins have been proven to reduce inflammation in the body. Reducing inflammation is especially important in dogs with skin issues, as it can be a large contributing factor to the severity of these issues.


Why it is important to promote slow eating?

The groves and bumps that the Lickimat has, provide a challenge for the dog to get to the food. The slower that a pet will eat the less likely they are to be bloated.  The slower your dog eats the better it is for their digestion. Slow eating also provides a distraction. Boredom can be a big issue when it comes to dogs. The Lickimat is able to help combat boredom as it keeps them distracted for longer. The Lickimat also provides entertainment for your dog and also serves as a brain teaser. The more the dog licks the more endorphins are released, and they are more likely to be happier.

The Lickimat also promotes the redirection of licking habits. Many dogs when they are bored will lick at their paws, as the licking action releases endorphins. This is not a bad thing but excess licking, can cause irritation to the skin and this can lead to more severe issues like hotspots. The Lickimat is a redirection of this licking habit into something positive.


You can add all different types of food to your Lickimat, depending on the style. We recommend Greek yogurt and our Gut + Immunity Supplement added to the Soother Lickimat as it is a great way to ensure your dog is getting key probiotics. This is a great distraction for your dogs when trying to apply the Derma cream or Hotspot gel.

Delivery to your door

Let customers speak for us

Take regularly to boost my intake of omega and as an added benefit my skin is not as dry.Have also got used to the taste now👍

Only just using cream, to early to comment, but it seems to be ok at the moment 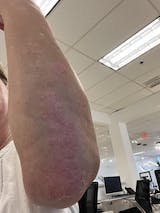 Battled eczema on my 3.5 year old for over a year, once this product was found it’s been a godsend. She loves that it doesn’t “sting” like some other products we’ve tried and she keeps a bottle with her near her bed, in the car, everywhere.

Although it didn’t clear my elbows up completely, it has made such a big difference!!

Hi Katie, thank you so much for your progress report. Some conditions do need a bit more time to heal but we are glad it has made a big difference so far! :)

I use to get dry extremely flaky, itchy skin on my face especially around my hair line and eyelids. Since I've started using this product last year I have not had a single bit of dry skin. I was worried I would get pimples on my more oily parts but not a single pimple. Great moisturiser. Highly recommended.

Thank you so much for your lovely review Katrina!

I have only just started using this product, so I cant speak much on the results, although I have no doubts that it it is a good product. Although I found that my bottle leaked and I lost about have the product. I think a pump top lid would be more efficient as when I would use it I found it would dribble down the side and cause a mess. Nonetheless Im so glad this is an aussie product and will definetly be buying from them again.

What an amazing Company to have found. Thank you to the Pet Drs; for providing wonderful products for our best furrends health. My doggies on these 2 wonderful products combined have no more skin irritation, their coats are so shiny and healthy and it has provided them with excellent digestive health too. The mega oil is an excellent alternative to fish oil too as my pups are allergic to fish. The stress and anxiety supplement has also been brilliant for my little senior dog and I've noticed a huge improvement. Excellent products definitely resulting in both happy and healthy pups and I'm so extremely pleased to have found them and I know my dear doggies are too! 😊🐾